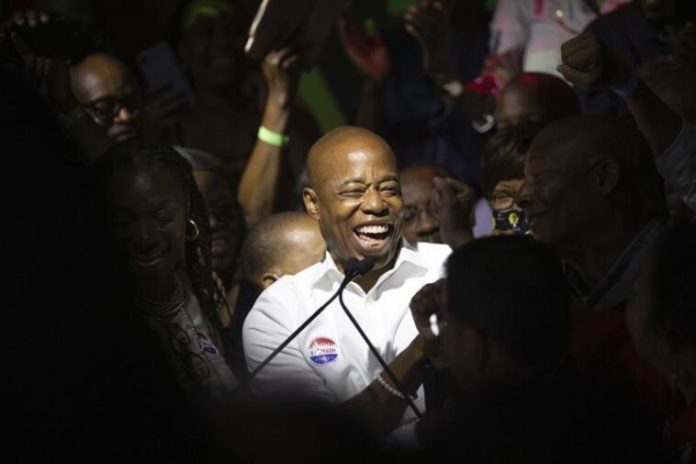 New York (AP) – Brooklyn Borough President Eric Adams has won the Democratic primary for mayor of New York City (NYC) after appealing to the political center and promising to strike the right balance between fighting crime and ending racial injustice in policing.

A former police captain, Adams would be the city’s second Black mayor if elected. He triumphed over a large Democratic field in New York’s first major race to use ranked-choice voting. Results from the latest tabulations released Tuesday showed him leading former city sanitation commissioner Kathryn Garcia by 8,426 votes or a little more than 1 percentage point.

Since most likely the Democratic candidate will win the general election for the city’s mayoral position, perhaps it is useful to see who Eric Adams is. After all, why learn about candidates before they are elected – its the way many American voters vote.

New York (New York Times) – As early as 1994, Adams had decided that he wanted to be mayor – a desire he expressed to Bill Lynch, a deputy mayor under David N. Dinkins, the first Black mayor of New York City.

Adams speaks frequently of his dual identity as a 22-year police veteran and a Black man who endured police brutality himself as a teenager. He said he was beaten by officers at age 15. Adams became a police officer in 1984 and rose to the rank of captain before leaving to run for the state Senate in 2006.

During an Easter Sunday visit to the Church of God of East Flatbush, Adams cited a biblical passage that describes a test of courage under duress. “I believe in all my heart that this is an Esther 4:14 moment,” Adams, 60, told the parishioners. “God made me for such a time as this.” However, there is a perception among some Democratic leaders, strategists, and mayoral rivals that Adams’s career has been driven by self-interest rather than civic-mindedness

While in the police department, he co-founded 100 Blacks in Law Enforcement Who Care, a group that campaigned for criminal justice reform and against racial profiling.

Eric Adams is a study in contradictions who at different times has been a defender of Nation of Islam leader Louis Farrakhan, a registered Republican and a Democratic state senator thriving in a world of backroom deals.

During Adam’s run for Borough President, his well-documented past emerged, a past that was buried by media for this latest Mayoral primary, why? Take a walk down memory lane here and learn more about Adam’s connection to Louis Farrakhan and the Nation of Islam.

At age 15, Adams and his brother were arrested on criminal trespassing charges. Mr. Adams said he was beaten by officers while in custody and suffered post-traumatic stress from the episode. Yet it fueled his desire to become a police officer six years later, he said, after a local pastor suggested that he could “infiltrate” the department and help change police culture.

Adams’s reputation also suffered from a series of unorthodox stances or appearances while on the force: He traveled to Indiana in 1995 to escort Mr. Tyson after his release from prison rape charges.

After winning a state Senate seat from Brooklyn in 2006, Adams made an impression with an impassioned speech favoring same-sex marriage rights in 2009, two years before New York’s state legislators passed a marriage equality bill.

Adams also weathered a few controversies, including a 2010 report from the state inspector general that faulted his oversight of the bidding process to bring casino gambling to the Aqueduct Racetrack in Queens. Adams had accepted campaign contributions from a politically connected group bidding for the gambling franchise.

Adams tends to have more moderate positions than some of his left-leaning rivals, like Stringer, Wiley, and Morales. Adams has proposed diverting $500 million from the New York police budget to fund crisis managers and crime prevention programs and has pledged to further diversify the police force.

The question becomes, just how will Eric Adams govern as the mayor of New York?

Though Adams tries to balance between the Left and far Left, it appears the real constituency Adams supports is himself. He seems like more of an opportunist in his career – bobbing and weaving to gain favor. So the focus on this mayor will be crime that is sharply rising, some perceived social justice, and being a politician. No thought of actually building the city.

Almost all New Yorkers know a neighbor or small business that has left the state, especially businesses struggling to hang on after the pandemic. As New York considers raising taxes on New Yorkers to cover the looming budget gap, one man and business owner says he is exiting to avoid any more tax hikes and shutting the doors of his popular business. About 1.4 million people have left New York since 2010 – see here.

What will Adams do to stop the exodus from NYC?

Remember the days when the NYC’s mayor was considered America’s mayor? Rudy Giuliani, for his mayoral leadership after the September 11 attacks in 2001, was called “America’s mayor.” Giuliani was named Time magazine’s Person of the Year for 2001 and was given an honorary knighthood in 2002 by Queen Elizabeth II of the United Kingdom.

We shall see how Adams performs, but don’t look for Adams to be America’s next America’s Mayor.