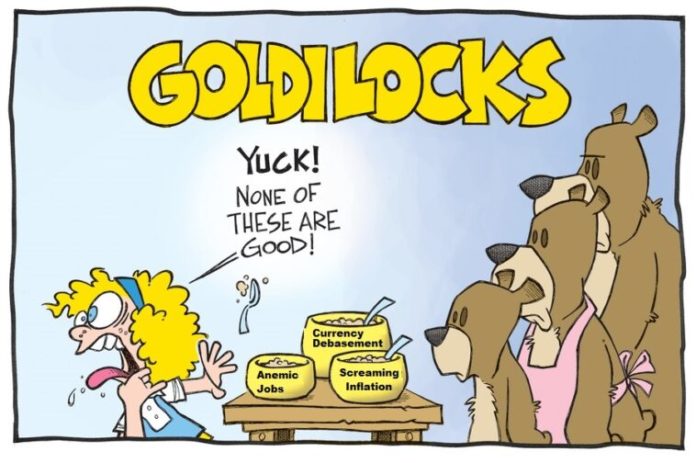 The BLS came in with a strong jobs number when it reported that the US added 850K jobs in June, well above the 720K expected and almost 50% more than last month’s 583K, in a welcome sign that the chronic labor shortages may finally be ending.

Despite the stronger than expected monthly increase, the US is still 7.6 million people below its pre-Covid level.

Where did the jobs come from? Even more bartenders and waitresses. A few highlights:

The Labor force participation rate of 61.6% was unchanged from last month and just below the 61.7% expectation – well below pre-covid times.

The unemployment rate, however, rose to 5.9% against the 5.6% expectation.

In the meantime, inflation is screaming – look at the charts here. Biden bragged about creating 3 million jobs since he took office, but most jobs are low paying and mere recovery from the Covid “pandemic” lows. Despite this reality, the White House Press Secretary Jen Psaki bragged about the price of hot dogs being down a whopping 16 cents.

The comments from Psaki were widely mocked on social media as everyone knew her comments were comical. If things are so wonderful in the economy, why the need for more stimulus spending via more talk of infrastructure spending?

Benchmark mortgage rates rose above the 3% mark once again, as bond markets responded to signs that the Federal Reserve could hike rates sooner than previously expected – due to inflation fears. This has recently boosted the Dollar, though it is curious that an interest rate hike telegraphed years in advance has such an effect on the markets – perhaps the markets don’t believe the Fed, and they will raise rates much earlier than they are telling us.

Another interesting phenomenon is developing in the economy. Massive shortages are building. Here are few examples of these shortages:

This poses an interesting question. If all these shortages are occurring, why are businesses not investing to meet demand? One reason might be that business understands that the economy is not recovering in a normal way – it is a recovery via stimulus that will be short-lived. Still, another is that the government is paying too much for people to stay home – see here. In addition, with inflation and currency debasement, the earnings of Americans are not keeping pace – see chart below. Besides, shortages lead to higher prices – can Americans pay these higher prices?

Other issues may involve the fear of Biden taxes and any potential next Covid waves that may come. It is better to use the low-interest rates to buy back their own stock and wait to see if the recovery is real.

As of July 2021, there are three aspects of the economy that are weighing on the average American:

Despite Biden painting the economy as a Goldilocks economy, it is only Goldilocks for those on the upper end of the social-economic class. Economic storm clouds are building – see here.

-Shared by our friends at the Right Wire Report.