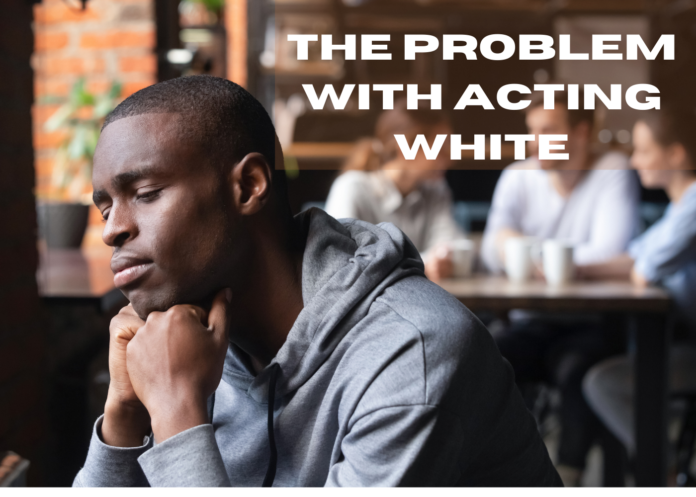 This is a big problem. A person’s education strongly influences quality of life, government dependencies, the presence of racist beliefs, health outcomes, and criminal behaviors.

Like anything disproportional today, different educational outcomes are wrongly blamed on racism. The outcomes are instead self-inflicted and due to different parental and student priorities on education, electing democratic politicians that support the teachers’ unions, and a disdain for “Acting White.”

Acting White. African American Sophonia Scott Gregory wrote: “The phrase “acting white” has often been the insult of choice used by blacks against those [blacks] who moved forward…it rejects all the iconography of white middle-class life: a good job, a nice home…The anti-achievement ethic championed by some black youngsters declares formal education useless; those who disagree and study hard face isolation, scorn and violence.”

Blacks are not the only race/ethnicity in America to devalue education. Others have, but not due to a contrived association with white culture. Italian’s saw education as a distraction from hard work and making money, until they realized it was essential to less work and more money. Latino motivations and trends show a path similar to the Italians. Latinos used to rank fourth on the educational and average household income rankings. Now they are third on both counts.

Asians are also not the only race/ethnicity to deeply value education. The Irish were Britain’s inferior ethnicity and it traveled with them across the Atlantic. They saw education as the great equalizer. For the Jews, free public education was key to exiting slums and sweatshops and being accepted as Americans rather than despised as Jews.

Unions and Education. The United States sits among the top countries for per student spend on public education. The rankings on the Program for International Student Assessments (PISA) have American students coming in 11th place for reading, 32nd place for math and 13th place for science. (In China where life’s highest value pursuit is learning, students top the global rankings with a third of American student spend.) Test score rankings by racial/ethnic groups in America are Asian, White, Latino, and Black, with the exception that whites come out on top for reading. Latinos and Blacks have been found to score much higher when they attend public charter schools. A study by Stanford University on charter schools found, “poor black students gained 59 days of additional learning in math and 44 additional days in reading. Latino students with English Language Learning status gained an additional 72 days in math and 79 days in reading.”

Charter schools represent 7% of US public schools. Trying to increase their availability has been a challenge. Non-unionized charter teachers are a problem for America’s powerful teachers’ unions, and also Democratic lawmakers, the NAACP, and leaders like Al Sharpton because they receive hefty financial donations from the unions. Some efforts smack of desperation, such as equating the disproportionate presence of Black and Latino charter students as a backdoor to re-segregation and accusing the parents of charter students of “doing the business of slave masters.” Biden denounced former Secretary of Education Betsy DeVos’s strong support for charter schools and school choice. His timing was odd because charter students were faring better than those in non-charter public schools during the pandemic.

During the pandemic, Black and Latino public-school students in Blue States where unions are strongest suffered the greatest learning setbacks. Today, a majority of these students still don’t have access to full time in-person learning, and Democratic leaders acquiesce on the sidelines. Meanwhile, kids of all races/ethnicities in Red States are being better prepared for future success.

Parental Priorities. The most influential factor on educational outcomes is not income or what school a student attends; its diligence studying. In high school, Asians are the top studiers, spending 2-300% more time than any other race/ethnic group. Whites came in second, Latinos third, and Blacks fourth. Whites spent 30-40% more time working and doing chores, and blacks 15-28% more time playing sports and watching TV. Latinos came out on top for socializing. What determined kid’s priorities? The attention of mothers and environments encourages education.

The same study pattern was found in college with whites closing the gap to be within 33% of Asians. Enrollment to college graduation rates of 38%, 45%, 62%, and 63% for Blacks, Latinos, Whites and Asians respectively correlate with priorities and study patterns.

No racism here. Education is the great equalizer when parents and students alike place an equal value on its importance. Democratic political opportunists and other race hustlers pointing a finger for disproportional education outcomes on White systemic racism strengthens a disdain for “acting white,” and diverts attention away from addressing unequal outcomes. It’s part of a Democratic woke stratagem for amassing power, that is achieved at the expense of tens of millions of children, of which Blacks and Latinos are hardest hit. This is perhaps one of the grandest travesties of the Democrats’ systemic racism canard.

About Kathleen Brush
Kathleen Brush, Ph.D. MBA is a management consultant that specializes in two areas: maximizing the outcomes from global strategies and improving organizational productivity by increasing the number of competent women in senior leadership.

Her Ph.D. is in management and international studies. She has more than 20 years of experience as a senior executive (CEO, GM, and CMO) for companies of all sizes, public and private, foreign and domestic. She has been conducting business internationally since 1988 and has overseen the successful sale of three companies.

Her books include: Racism and anti-Racism in the World: before and after 1945; Watch Your Back; The Power of One: You’re the boss; and A Brief History of International Relations: The World Made Easy. Currently in process and planned for publication in 2021 is Silent Sexism: Women wake up and take charge.

The Era of the New Word

Another great article Kathleen. The clarity is refreshing. Education is the great equalizer!

Kyle Rittenhouse Could Be The Next Nick Sandmann

Undoubtedly you have heard of Kyle Rittenhouse and his troubles in Kenosha, Wisconsin. Do you remember Nick Sandmann? CNN and the Washington Post certainly do. In January 2020, CNN reached an undisclosed settlement with the former Covington Catholic High School student. Sandmann had sued the network for defamation after the network falsely portrayed his actions at a 2019 March For Life rally in Washington, D.C. His attorneys asked for $275 million.
Read more

Thought leaders are starting to look at what is next after Covid-19....
Read more

Kyle Rittenhouse Could Be The Next Nick Sandmann

Undoubtedly you have heard of Kyle Rittenhouse and his troubles in Kenosha, Wisconsin. Do you remember Nick Sandmann? CNN and the Washington Post certainly do. In January 2020, CNN reached an undisclosed settlement with the former Covington Catholic High School student. Sandmann had sued the network for defamation after the network falsely portrayed his actions at a 2019 March For Life rally in Washington, D.C. His attorneys asked for $275 million.
Read more

Thought leaders are starting to look at what is next after Covid-19....
Read more