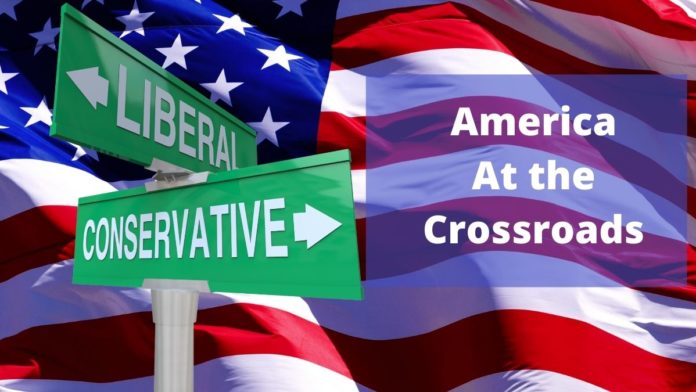 In the first decade of the 21st century, populist conservatism seemed to be not only on the ascendant, but also one of the of best suited ideological movements to combat rising evils across many areas of society. First of course, is the Tea Party’s rise to battle run-away financial corruption on Wall St. and from global banking, including debt-based “development” finance that seeks to use debt as a cudgel against third world countries.

Populist conservatism argued for ending the American foreign occupation. Steve Bannon famously argued that the rural regions of America were supplying their ‘sons and daughters’ to a Washington elite that used them as cannon fodder to advance American corporate interests abroad. He is right. Included implicitly in this argument against Corporate America was its political de-prioritization summed very eloquently in ‘drain the swamp,’ a process that sought to end corporate influence on American politics at its roots by castrating the Washington bureaucrats, lobbyists, and special interest group staffers that guard access to the American political process by everyday American workers.

If that were not enough, the populist conservative movement also dared to argue against the United Nations system, which has many, many flaws that are becoming more evident through each passing year. President Trump, for example, withdrew America from some of the umbrella United Nation affiliate and associate bodies, and threatened to pull funding from the United Nations and the causes and approaches that the United Nations takes to enslave developing nations.

While at the beginning of Trump’s Presidency the viewpoint that the United Nations system needed wholesale deletion or reform seemed unimaginable and sacrosanct, at the end of his Presidency the notion of United Nations reform seems like a logical policy priority. We have much to thank President Trump for in this regard including vocalizing the since proven viewpoint that Chinese malfeasance or aggression led to the creation and spread of the “wuhan” coronavirus.

Politically, populist conservativism seemed to reject social luddism and even embraced Hollywood, urban centers, and the LGBTQ community as potential supporters and voters, whereas Republican leaders before simply left these areas out of major campaigns and messaging strategy. Many populist conservative urban leaders have since succeeded in local and national campaigns offering entirely new demographic representation within the modern GOP.

Politically, the populist conservative movement also, finally, did away with Bush-era ideology, which was threatening to permanently stain, tarnish, and damage the institution of the Presidency as one singular family seemed to dominate and control Republican politics even after failing repeatedly in their main policy priorities. It was time for change, which even President W. Bush seems to acknowledge in his sparce media appearances during the past four years. The Cheney’s seemed to have “lost” this memo.

But what began as an urgent oppositional movement, populist conservatism, in the face of globalism, offshoring, foreign wars and occupations, and Republican stagnation, has not ramped up its core ideological agenda in the years since Trump won The White House. This should not be viewed as the administration’s fault, especially since the coronavirus occupied so much of their time and resources. However, populist conservatism continues to remain a ‘one-man-show,’ succeeding based on President Trump’s charisma, talent, and political foresight, while those who would be typically responsible for agenda setting and continuance have been relegated to social media cheerleading. Where is the ambition of populist conservatism to take its initial seedling concepts to affect global reform?

The Populist Conservative Agenda In The Middle 21st

The populist conservative movement has a unique opportunity to begin to take its oppositional ideology in force against the evil and unproductive institutions that limit human potential. For example, populist conservative’s opposition to the United Nations can be mobilized to begin the discussion of wholesale UN reform. What would that look like? It certainly starts with reaffirming national sovereignty and ending fractional reserve banking.

Courageous men like the Paul’s have argued for decades about the urgent need to ‘audit the fed.’ Why has this argument not stayed front and center in today’s populist conservative movement? Why are populist conservatives not championing Federal Reserve reform especially after the Trillions of Dollars of bail-out stimulus enacted by a fairly liberal Congress during the peak of the coronavirus pandemic?

Why are we not seeking to end debt-based “development” finance via institutions such as the International Monetary Fund, The Bank For International Settlements, or the many other quasi-governmental institutions in the United Nation’s orbit that are simply extensions of western corporate interests and that operate in these regions without any semblance of law and order, offering cash-for-access schemes that are wasted on failed local initiatives. America must have much higher standards for distributing foreign aid rather than failed ‘do-gooderism’ that foments deep ideological resentment against America in these developing nations.

I would like to beg the question: why did the oppositional elements of some of the boldest aspects of populist conservatism not transition to policy reforms? It certainly was not President Trump, who almost single-handedly battled against a liberal Congress to remove the United Nations from some of these United Nations group and cut foreign spending. Where was his ideological backup?

For Trump to have a shot at winning in ’24, the populist conservative movement needs to create a much more robust agenda, and no, conservatism does not need to shrink its platform so that it fits on the back of a placard. Populist conservatism is the only ideological movement that is both philosophical and legitimate enough to take on, and win, the institutional statis of the United Nations, the International Federal Reserve banking system, and runaway corporate interests that seek to supersede national sovereignty. Its only current limitation is our collective imagination and will toward greatness.

William E. Scholz is a conservative from Pennsylvania. His first book, published at the height of pandemic bail-outs, argues for a renovation to the world financial order, and is currently available via his publishing company Dignified Publishing. You can follow him on Twitter @wstweetsnews.

Sunday Thoughts: Dad, a Philosopher With a Sixth-Grade Education, Was Right About the World

Liberals are masters at creating viral buzzwords used as mantras to condition their followers to repeat without thought. This is the first of a series of columns that will cover some of the most prominent leftist viral buzzwords.
Read more

The Truth Be Told Podcast discusses the important political and cultural issues of the week and provides analysis that will give a different perspective and how these stories will affect us all in the near future. Now, stop reacting and start thinking. The topical notes for this June 18, 2022, “Urban Warfare in America?”
Read more

Liberals are masters at creating viral buzzwords used as mantras to condition their followers to repeat without thought. This is the first of a series of columns that will cover some of the most prominent leftist viral buzzwords.
Read more

The Truth Be Told Podcast discusses the important political and cultural issues of the week and provides analysis that will give a different perspective and how these stories will affect us all in the near future. Now, stop reacting and start thinking. The topical notes for this June 18, 2022, “Urban Warfare in America?”
Read more