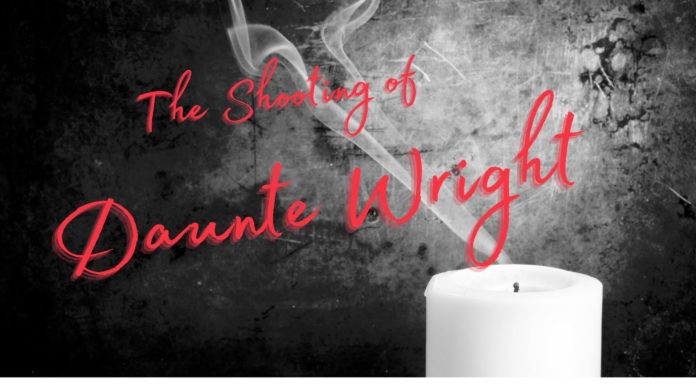 Daunte Wright was a 20 year-old black man fatally shot by a police officer in Brooklyn Center, a suburb of Minneapolis on Sunday, April 11th.  Daunte had an existing warrant for his arrest, and decided to resist arrest and flee.  This tragic decision by Daunte triggered the unfortunate result, which mainstream woke media frames as Police Violence against blacks.  Riots in Minneapolis and elsewhere have resulted.

The 20 year veteran white female officer grabbed for her taser, supposedly, and instead grabbed her gun.  As she yelled “Taser Taser Taser” into the car, as she fired a single shot from her handgun, striking Daunte in the chest as he drove away.

“Authorities said the car was pulled over for having an expired registration and after determining the driver had an outstanding warrant, police said they tried to arrest him. The driver then re-entered the vehicle, and an officer fired, striking him, police said. The vehicle traveled several blocks before striking another vehicle.” – Fox News

Here are more thoughts from around the web:

“The outstanding warrant would give any law enforcement officer pause to assess the possible lethality of the situation, the guy had a failure to appear for waving a gun in an incident. Everyone wants to go home safely at the end of work, a trip, a game, whatever the case. Daunte chose to resist. The female officer grabbed the gun instead of the taser, not sure how often that can be a problem, but, there would not have been any issue if Daunte had complied with the officers’ requests.” – Fox News Commenter

This person blames police and racism.  (No responsibility placed on Dante for his resisting arrest)

“Charging the officer is not justice. It’s one step in a flawed process towards accountability. Justice is a country where Daunte is not pulled over. Where he is not killed. Where Black people can live free of fear from police violence. Where we can thrive.” – Twitter Commenter

This commenter mentions gun violence in the black community involving youths and Police Violence. (Police in total killed less than 10 unarmed black people resisting arrest in 2019, under 20 in 2020 – Facts widely ignored by Democratic Party media outlets such as CNN, MSNBC, etc. who would seem to rather inflame violence and hate.)

Our summary is that the race grievance industry thrives on such events, and that every corporation is now afraid of being cancelled and will stand behind any instance of blaming white people for the troubles of the black community. News outlets largely play one side or the other for ratings and political advantage.

Our thought is more in line with the 1969 song from Elvis Presley “In the Ghetto” where an angry young man dies in the street, tragically – and everyone is too blind to see that kids need to be raised up with responsibility and contributing to society before this happens. News media profits, victim mentality, and woke culture are ruining our future.