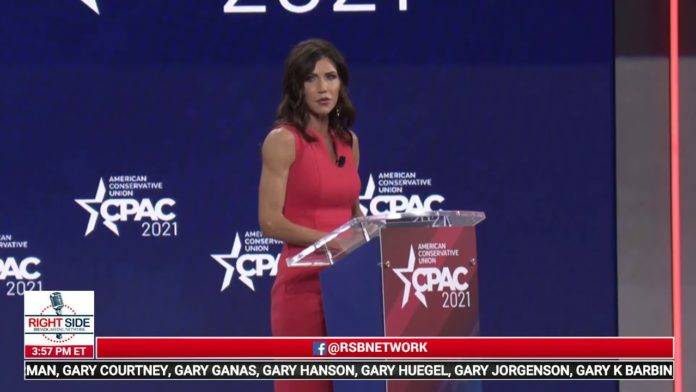 South Dakota Governor Kristi Noem shone in the spotlight Saturday at CPAC. The event was broadcast live by Right Side Broadcasting Network (RSBN). Noem discussed how well her state has done using real science, not shutting down any businesses, and ripped Andy Cuomo, rallying the crowd who supported her legacy of fact and science with enthusiastic boos at the mention of Cuomo’s name. Her talk was like an enjoyable ride on a rollercoaster of freedom. Dangerous, but refreshing.

Her words were a mixture of warning and hope, while jabbing imposters with a well-sharpened stick. Much of the speech is transcribed below. The full video is also embedded for you to enjoy.

“By the beginning of 2020, President Trump had created seven-million new American jobs, we had the lowest unemployment rate in over half a century, and unemployment rates for black, hispanic and asian Americans reached the lowest levels in history. More than 10-million people had been lifted out of poverty and out of welfare.”

“And all of that changed in March.”

“The US economy came to an immediate halt.”

“But not everyone has followed this path. For those of you who don’t know, S. Dakota is the only state in America that never ordered a single business or church to close (loud applause).”

“We never instituted a shelter in place order; we never mandated that people wear masks (more applause); we never even defined what an essential business is, because I don’t believe governors have the authority to tell you your business isn’t essential.”

When Noem mentioned Fauci, boos were heard. “Dr. Fauci; he told me on my worst day I’d have ten-thousand patients in the hospital. On our worst day, we had a little over six-hundred. I don’t know if you agree with me, but Dr. Fauci is wrong a lot (long applause).”

“My administration resisted the call for virus control at the expense of everything else. We looked at the science, the data and the facts and then we took a balanced approach. I never thought the decisions I was making were going to be unique. I thought there would be more who would follow basic conservative principles.”

She called the restrictions arbitrary. “Often the enforcement isn’t based on facts. Justifying these mitigation efforts has been anything but scientific.”

“They labeled me as ill-informed, that I was reckless and even a denier. Some even claimed that S. Dakota was as bad as it gets anywhere in the world when it comes to COVID-19. That is a lie.”

“Now seems like a really good time to remind everyone of what Governor Cuomo was doing in New York. On March 25th Cuomo ordered COVID patients into nursing homes, and he prohibited the staff from testing people before admitting them. Nine days later he pushed legislation prohibiting nursing home lawsuits over COVID deaths. Six days after that he prohibited nursing homes from sending COVID patients to the nearby Naval hospital ship or the field hospital, both of which were essentially empty. Eight days after that the first deaths started to show up. On January 28th of this year, the New York Attorney General announced that Cuomo and his administration significantly undercounted the number of COVID-related deaths in nursing homes by as much as fifty-percent. To make matters worse, they tried to cover it up. That is the media’s COVID hero. He also earned an Emmy, and wrote a book!”

“In S. Dakota we did things differently. We applied common sense and conservative governing principles. We never exceeded our hospital capacity and our economy is booming. We have the lowest unemployment rate in the nation.”

“We are number one in the nation for keeping jobs, keeping businesses open and keeping money in the pockets of our people. The people of S. Dakota kept their hours and their wages at a higher rate than workers anywhere else in the nation, and our schools are open.”

What Can We Learn?

“Across America these last several months we watched an organized, coordinated campaign to eliminate all references to our nation’s founding, and many other parts of our history. Rather than looking to the past to help improve our future, some are trying to wipe away the lessons of history, lessons we should be teaching to our children and to our grandchildren. This approach focuses exclusively on our forefounders’ flaws, and it fails to capitalize on the opportunity to learn from their virtues, and they had many of those. By discrediting the individuals who formed America’s founding principles, they create doubt, and then they can re-make America into a very different political image. It is our job to help explain why this is wrong.”

“America wasn’t founded for the personal gain or personal power of men like Washington, Adams and Jefferson. The signers of the Declaration of Independence put their lives and their sacred honor on the line and they affirmed people’s God-given freedoms. Still today, the Declaration of Independence is one of the most important statements of purpose ever written, and not just because it serves as the justification for our independence to the entire world, but also because it has led to our prosperity, and it’s inspired many other nations and peoples to seek freedom.”

“Our founders had their flaws, certainly, but to use those flaws to condemn their ideals and the greatest Constitution that the world has ever seen is both unjust and it’s self-defeating.”

“Freedom is better than tyranny. We are unique. We are exceptional.”

“And no American should ever apologize for that.”

What Can We Do Now?

“You can be bold! You can show up! Debate these ideas. Persuade your neighbors. This pandemic illustrated that many politicians have a totally different vision for government than what the founders laid out. It was once said that the left takes its vision seriously; more seriously than it takes the rights of other people. They want to be our shepherds, but that requires us to be the sheep.”

“Let it be heard loud and clear right now!”

“We will not be sheep!” (followed by applause and cheers of USA!)

Monica Showalter wrote for The American Thinker “Looking like a million bucks, (Noem) spoke of freedom, constitutionality, liberty, state’s rights, fiscal discipline, and cited the facts and figures of her gubernatorial record.”

Noem closed with a story about her father.

Showalter wrote “It was original. It was far from the canned ‘personal stories’ Democrats always begin their speeches with, because it came off as very real. Noem spent her early 20s managing a huge farm ranch, developing early leadership and responsibility skills, and marking the person she’s since become.”

The Rest of the Story

“My dad was a cowboy. He was the toughest person I’ve ever known. Ever since I was a little girl I just wanted to grow up and be like him. He died at an accident on our farm when I was 22 years-old. A couple months after he was killed, I finally got the courage to go out and clean out his pickup. All of you who have a farmer or a rancher in your life, you know they often live out of their pickups. Everything important can be found in the cab; their wallet, bills to pay, tools, you name it. And if you need to find something important, every single one of us farmer’s kids knows the pickup is the first place you look.”

Over the months, Noem said she had many questions about how to run the farm without her dad, saying “I was determined that we weren’t going to fail … I stuck my hand down into the console in the middle between the chairs in the front seat and I started to put items in the box that I was taking out. A pliers … a Baby Ruth candy bar, notebooks, pens, tools, and then I found a little, tiny tape recorder. It was the kind of tape recorder a doctor dictates into. I pushed the play button, and immediately I heard my dad’s voice. He was talking about seed corn varieties, which ones had performed well on certain fields that we owned that went with certain soil types … He spoke about how we’d had such a wet year the year before, that resulted in poor crop yields and damaged grain … he went on to describe what kind of variety choices he would have made differently, what he thought might work better for the Spring that we were anticipating ahead.”

“My eyes started to fill up with tears as I realized I was learning information that was going to be helpful to me in making crop decisions. I looked down into the console and I saw several more tapes, almost a dozen of them in all, and one by one, I put them in the tape recorder, sitting there in that pickup, and I listened to my dad’s voice talk about the cows, weather, markets, and what to do if we were ever caught in a tough financial situation. Inside those tapes were the answers to so many of the questions that I had had over the past several months. Over and over again, I had said … if I could just ask dad! And here in my hands were all the answers that I needed, straight from him, in his voice in the palm of my hand (applause).”

“It was almost at that moment as if God was saying to me … I will provide! Stop worrying! You will be okay; your family will be okay; I’ve got this! I had the answers; I just needed to get to work.”

“I made a decision that day, to be like my dad. A person of words, but a person of action. Because both matter. That’s why I ran for office. My mission is to make S. Dakota a better place. A better place to live, to do business and to raise a family. I believe S. Dakota has been an example to the nation this past year. People used personal responsibility to protect their families’ health and their way of life, while the government respected their rights and their freedom (applause). We are working together to create new opportunities and a better future for our kids. We took the American path.”

“As conservatives, we often forget that stories are much more than facts and statistics. Our stories need to be told. It is the only way that we will inspire and motivate the American people to preserve this great country! We must go into this fight for freedom with our eyes wide open, educated to the tactics the liberals will use, while totally pure in our motives. This isn’t about us. It’s about our children and their future. It’s about the nation we’re going to pass on to them. It’s about telling their stories over and over, that remind us why America needs conservatives, now more than ever. So thank you for all that you do. America is blessed to have you on her side. God bless each and every one of you, and may God bless the United States of America.”

Coverage of CPAC in Orlando continues today with a speech by President Trump.