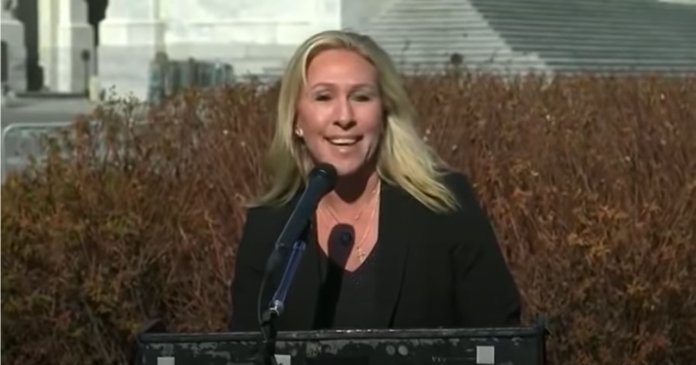 Who to hate? Who to believe?

US Representative Marjorie Taylor Greene (R-GA) held a news conference the day after the House voted to remove her from her committee assignments. She defends our military and unravels one lie after another. She’s survived being targeted by the same liberal conspiracy plot she has dedicated herself to uncovering.

“I have a message to other Christians in this country: Don’t be lukewarm. That’s not what your faith is for. Our Savior died on a cross so your sins can be forgiven and He doesn’t want you to be quiet about it. He wants you to share the Gospel, and share it with everyone!”

While some members of US Congress, like AOC, are bleeding the media spotlight with crocodile tears and fakeness in the name of wokeness … there is still at least one woman who’s not afraid to tell the truth, while ignoring the fake punishment she received from house associates. Everything Marjorie Taylor Greene says in the conference (video below) is true. Notice there’s a lack of personal dramatic emotion based on lies. She’s truly a strong, independent woman.

Greene has been unfairly painted by media, and some Americans have bought into it. But she climbs out of the mud with a smile and positive attitude, hoping, still, not for vindication, not for her spite to be spread and broadcast, but for righteousness, even when it feels hopeless, and just after she was victimized.

This twenty minutes of reality is powerful, hopefully enough to counter years of disloyalty to the American public by fat politicians, and breach the weak armor of the whiny, crying, lying left.

“I was in the chamber, unlike AOC, who faked her outrage with another hoax, just another hoax that gets shared everywhere. Those kind of fake lies, like AOC, Rep. Cory Bush telling people I attacked her when in fact it was on video that she attacked me; this is the kind of fake outrage that is dividing our Congress, along with the fake outrage on the news every day that’s dividing our people. You know what the media does, and you guys are great at it; and I’m telling you this because I want to like you; but you’re doing a really good job teaching our nation to hate, teaching people to hate people like me, President Trump. And then on the right it’s the same way! Teaching people to hate AOC, Ilhan Ohmar, Nancy Pelosi; see, it goes both ways, doesn’t it? But teaching people to hate and addicting them to it, is killing our country. It’s causing people to no longer be friends, families to no longer talk to each other, even husbands and wives getting divorced, parents not talking to their children, and the other way around. I think that’s terrible, and it’s shameful.”

“When you have such a platform as you have, what do you want your legacy to be? Do you want your legacy to be the platform that destroyed our nation and caused our people to hate one another, or would you rather it be a platform that told the truth, because you’re given the great gift; the freedom of press, so you can tell the truth. I would love for you to be that platform, and I would be so proud of you. I wouldn’t be mad at any of you!”

Please don’t believe mainstream media’s agenda. The truth is the world needs a new Greene deal. This new, improved deal won’t cost you an extra penny. Thanks to Greene for holding the torch as the world continues to descend into pure, near perfect darkness.

There is still hope, and it has a voice. “The few bad actions of some do not define the many, and that’s the truth!”