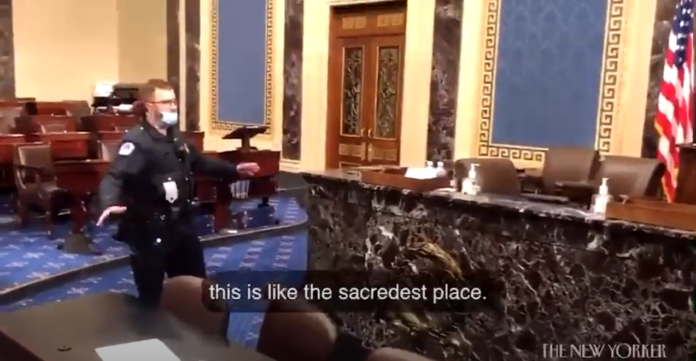 Remember in Austin Powers, how Doctor Evil pretended to be evil, but he was sort of a pushover? He loved his cat more than he wanted to really take over anything. And he enjoyed being in the limelight!

That happened in Washington, DC, for real!

It was earlier this month at the Capitol! But the violent insurrection went wildly wrong when some behind-the-scenes footage was released on the dangerous information-sharing venue known as “Twitter.” The platform’s irresponsible management has once again dropped the ball, letting this go public.

The footage appears to be taken from a video produced by the New Yorker. They wrote a complicated, though confusing, article; it made clear it’s confusing. Really confusing, because the actors do not look convincingly like Trump supporters, though that’s what we’re supposed to believe.

Trump supporters behave. There’s history behind this. Near the end of his campaign for re-election, Trump was holding as many as five rallies A DAY attended by 10- to 40-thousand polite, healthy, well-behaved supporters. These actors are wearing funny costumes and behaving like anti-social troublemakers, which has never before been seen among a group of Trump supporters, but which is typical of leftist mob members who’ve ruined large parts of cities in the western US.

Decide for yourself, but I’m sure of one thing: Dr. Evil was a better actor!

But think about it. The New Yorker wants you to believe this was an insurrection. How might they justify this, their own sentence: “A lone Capitol Police officer politely asks the group to leave the “sacredest” place in the Capitol.” How is it possible? If you and your friends stormed the US Capitol tomorrow, do you think it would go like that, with a “lone Capitol police officer” politely asking you to leave?”

I’ve recently been watching some really terrible old music videos on “Vevo 70’s,” which is worth it if you’re looking for archaic, Flintstones-style camera work, misaligned audio and general chaos with no makeup artist in sight. This video, though, from the New Yorker, made me realize it’s okay to laugh at really bad acting, when it’s so bad it’s almost as if you’re supposed to laugh.

My conclusion: Not just staged, but BAD.

If you’re about to explode in anger, go ahead and get it over with. There’s nothing to justify it, but you can still do it if you think it will help. The New Yorker tells us with confidence and conviction, to point us to the OBVIOUS conclusion that this was a coup by Trump supporters (somehow, for some reason) … “Earlier on the same day, Trump held a rally urging supporters to fight.” Can you imagine that? Fighting for an election! Things change quickly! In the past that was normal. Now you just hide in your basement to get re-elected, being careful not to say anything, and damn you if you fight.

The sins should be perfectly clear now.

Acting this bad should get you at least an extended entrance interview to Heaven by St. Peter, if not a full-blown formal denial from God. And that’s saying a lot, considering God enjoys VIVO 70’s and re-runs of The Jeffersons and even sometimes a little Flintstones.

The New Yorker positions itself as if it knows something you don’t. I bet they do. That’s why they think we’ll fall for Soros-paid high school kids and mid-aged men with bad costumes being bad at being bad.

I’m inspired to fight! My battle cry will be “fight against bad acting!”

Sad excuse for an insurrection. More like a social media prank. But yet I bet the leftist democrats in the Senate will all vote for Trump’s impeachment (whether still in office or not). Let’s see how many Republicans do. This may be the end of the Republican Party.