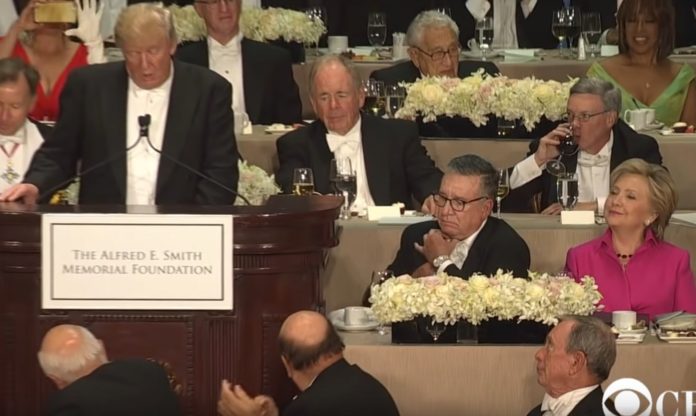 President Donald Trump, while campaigning, was brutal in a 2016 roast of Hillary Clinton. His primary weapon was not humor. It was truth.

How have the relationships shifted? What colors have been shown in four years? Other than Maria Bartiromo, who appears in a slightly-too-“red” dress behind Trump, he’s surrounded by people who will betray him like snakes.

But Trump made the best of the night, as you’ll see in the video.

He digs in, saying Hillary is sitting here “pretending not to hate Catholics!”

“She knows the jokes, and all of the jokes were given to her in advance of the dinner by Donna Brazile (Chair of the Democratic National Committee)!”

“It takes a village – she’s taken a number of them!”
At this point, Hillary did not laugh.

“According to her sworn testimony, Hillary has forgotten more things than most of us will ever know.”

The almost-President (at the time) rallied laughs while pitching truths to the crowd around him, like Daniel in the lion’s den. “Daniel, servant of the living God, has your God, whom you serve continually, been able to rescue you from the lions?” Daniel answered, “O king, live forever! My God sent his angel, and he shut the mouths of the lions. They have not hurt me, because I was found innocent in his sight. Nor have I ever done any wrong before you, O king.”

But that’s not funny. A little harsh, and it ends poorly for many.

“At the king’s command, the men who had falsely accused Daniel were brought in and thrown into the lions’ den, along with their wives and children. And before they reached the floor of the den, the lions overpowered them and crushed all their bones.”

Maybe it’s a good time to watch some funny reruns!

Public comments after the video, many of which are recent, are even better! Let’s enjoy them, while we’re still allowed to.

no avail – 2 days ago
“They hate hearing she’s corrupt because they’re all corrupt.”

Mikkel Petersen – 1 day ago
“He has nerves of steel.”

Noelia Rosbu – 1 month ago
“Everyone faking a laugh but he was talking truth.”

cris gayle – 1 month ago
“At least Clinton is laughing. If it were Pelosi she’d be ripping up her napkin”

Chriz Watts – 2 months ago
“Legends say, Hillary still has nightmares since this evening.”

prayagdutt pandey – 2 months ago
“No matter what you say about him. He is SAVAGE”

Eric TMN – 5 days ago
“The more I know him, the more I love him. He’s joking with Hilary. It’s just unbelievable ! (from France)”

Captain Swan – 4 months ago
“They never know what he will say. They cannot control him, and he knows all their evil secrets.”

Melissa Fowler – 1 month ago
“FACTS! YOU ARE FEARLESS, INCREDIBLE!”

Maxim Levitski – 2 months ago
“This man is a living legend. He keeps shocking them all and the entire world. There is no one like him.”

robby black – 10 months ago
“The man doesn’t know the name of fear. Not one single person in that room liked him, and he knew and DID NOT GIVE A DAMN!😂”

R KID – 1 month ago
“This is better then any Celebrity Roast! EVER! The Mans a Legend”

Vi king – 21 hours ago
“This was brilliant, to take her down publicly, beautiful.”

Carmen Raedelli – 5 months ago
“I’d rather have someone who is brutal with the truth, than elegant with the lies”

lapollod – 3 months ago
“Why is Trump, giving a speech to a crowd of his enemies, the only man not sweating?”

davidareyouhuman – 1 week ago
“He said this 4 years ago and people laughed at him. 4 years later and people are taking him seriously now. This is only the beginning. WAKE UP WORLD!!!!!!!”

Atma Satya – 4 hours ago
“Maria in the back is like a ray of sunshine in that darkness of the swamp.”

Samuel Morales – 3 months ago
“He knew his enemies way before. The man is not stupid”

Lore Engine – 17 hours ago
“My president has balls of steel. This was epic and it aged incredibly well!”

Dave Skywalker – 1 month ago
“Our First Lady is one of the classiest people I’ve ever seen.”

Harrison Craig – 2 months ago
“The cleavage in the red though. looooord”

In the book, Daniel is saved from the lions by the God of Israel “because I was found blameless before him!”

And though it may take more than a parable and stable of faithful video-loving citizens to save the world in 2020, it’s nice to revisit the past, when speech was public and if you didn’t want to hear it, you might have no choice.

And still, this wasn’t really, after all, a dance with lions.

That would be an insult to lions.