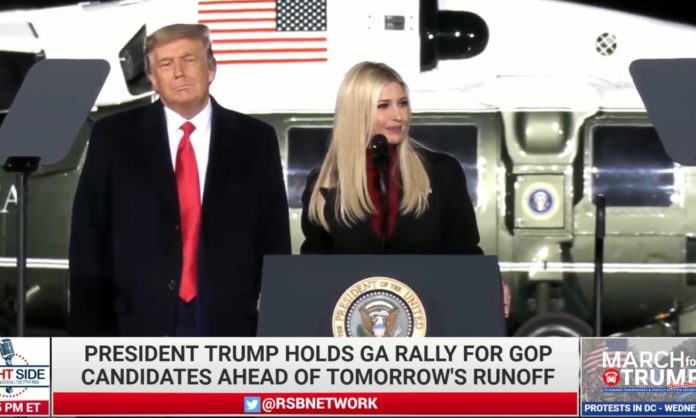 The President spoke tonight, one day before an important Georgia Senate election, before an enormous crowd at Dalton Regional Airport. The event was a Republican “victory rally,” but the best part was from a Democrat! Partisan politics was not the foundation of tonight’s rally, and didn’t need to be. Over 20,000 supporters filled the stands, and in the air was a sense of pride, not bitterness; unity, not divisiveness.

Marine One arrived at 9:02 PM. The event was broadcast live on YouTube by Right Side Broadcasting, with 216,223 viewers at 9PM.

“Biden was here also (today)” President Trump started out. “They had fourteen people in three cars!”

“Tomorrow each of you is going to vote in one of the most important runoff elections in the history of our country. The whole world is watching the people of Georgia tomorrow.”

And while tomorrow (Tues.) marks a critical GOP Senate race, the following day (Wed.) is also critical in the long game, with Congress meeting to confirm/deny electors. Trump said “I hope Mike Pence comes through for us! Mike is a great guy. He’s a wonderful man and a smart man, and a man that I like, a lot. But he’s going to have a lot to say about it, and you know one thing, with him, you’re going to get straight shots; he’s going to call it straight.”

The stands were full over an hour before start time, with a variety of commentary, music and speeches.

Among the presenters was a local favorite, Democrat Vernon Jones.

It was nothing but net for Jones! While we awaited the President, the State Rep. got things going! He preaches right up there with the best, but Jones is actually a data guy, beginning his career in the telecommunications industry, with MCI and BellSouth.

As Jones feels out the crowd … I believe him!

I believe him more than Mike Lindell (pillow guy), though Lindell’s pretty believable. More than Lin Wood, who’s preacher persona is a bit pushy … and much more than the guy they’re trying to beat, Raphael Warnock, who reminds me of the rude, impolite, stuffy boss no-one liked on “The Office.”

Jones vs. Warnock straight up, face-to-face, is a visual of the division America is being strangled by, an allegory of the battle between good and evil. Jones can be just plain fun, while striking some powerful chords.

A Vision of The Future?

Not only does Jones give a summary of true but whacky events in politics, and tell us he values his country over his political party, but he takes a virtual drape away, that had been covering the real intentions of the Democratic party. With the same overconfidence that propped up the Joe Biden real-life doll during Biden’s second debate with the President, when Biden outright refused to tell his intentions regarding packing the Supreme Court, now, instead of refusing to reveal, the overconfidence has morphed – Democrats around Biden have begun saying the wildest things, because their narrative says they won, and Hilary made it clear a President should never concede, therefore she’s rallied her side to do just that, while mocking Republicans for … vowing to never concede.

The drape is removed. That was easy! All that was required was a lie of an election, to convince Biden he can reveal secret intentions, like taking away guns, a topic Biden could never settle on in the past. Tonight Jones put “Biden’s future” in perspective.

Jones got the crowd’s attention telling a story from his mother, who told him regarding speeches, to …

“Keep it short
Keep it interesting
And cover the best parts!”

“You will not steal the vote no more in Georgia! We are fired up, and we’re not takin’ no more! Our leader, Donald Trump, is coming here tonight. We’re in the fight of our lives. When you’re in a foxhole, you want Donald Trump in the foxhole with you, ’cause Donald Trump will fight for you until his last breath, because what he believes in is standing up for you, standing up for me, and putting America first!”

“You all know I’m a lifelong Democrat! But I’m not here to save the Democratic party; I’m here to save the democratic republic! I love this country! All the men and women who served in the military, all the first responders; I want you to know we got your back!”

“If you don’t go and vote for Kelly Loeffler or David Perdue here’s what’s at stake: Your first amendment rights, your freedom of expression! Secondly, we have to be defenders of the 2nd amendment and they want to take our guns away! They embrace Socialism, Marxism and Communism! If you think that works, then you should move to Venezuela!”

“When you talk about defunding the police, who the hell do you call when you dial 911 and you want them to show up at your door, and you want to take away funding from them? They need more funding, for more training and more education! They’re talking about sending a social worker to answer a 911 call. Who’s … going to protect the social worker? That’s what the left stands for and that’s what’s at stake!”

“School choice! Democratic policies have kept our children in failing schools for years. Let the parent decide where they should send their child to school, and not the damn government! Parents know what’s best for their children!”

“You’re going to see them pass legislation, that when you go to school with your sister, your brother, and you pass them in the hallway, you can not say hello brother, hello sister; you’ve got to say hello sibling! They’re about to erase father and mother from our vocabulary. Now they want you to say parent. This is what the left is pushing!”

“The liberals have hijacked so many, including the African American community, to carry out their agenda. They don’t give a damn about black people! (crowd boos) This is what the left is doing!”

“We’re going to send (Jon) Ossoff, and we’re going to send (Raphael) Warnock, back home! We’re Georgians! We have traditional values. We believe in hard work. The left, they want to give everything away for free! They want to raise taxes on us, to get us out of this deficit, but on the other hand they want to close businesses down, keep people from working so they can pay their fair share, and that’s how we grow this economy, not from raising taxes, and that’s what they’re going to do!”

“Georgia, the world is looking at you!”

“This is about freedom!
They are literally erasing us off the face of the earth!”

After Jones, we heard from Donald Trump Jr., with a short, neatly-trimmed beard, and watched GOP promo videos on a humongous viewing screen near the stage, one saying “Georgia is a battle for the soul of America, between two political outsiders and two of the most radical Democrats you’ll ever see.” It highlighted Warnock’s finest moments, with a reporter on screen saying “He called our police officers gangsters, thugs, bullies and a threat to our children.”

A voice announces “We win Georgia, we save America!”

Loeffler later joined the President at the podium, telling the crowd “On January 6th, I will object to the electoral college vote! Georgia, we are the firewall to socialism! We have to get it done!”

While consistently receiving support from President Trump (this is the second rally he’s attended for her) Loeffler seemed to pause on backing Trump publicly on the question of election fraud, not revealing her intentions until today, that she will not approve of the electors Wednesday. What pressures she’s subject to, other than from constituents (who probably have been yelling at her to commit to the GOP stance) only she knows, but in an environment with reports of threats to polling whistleblowers and their families, the lingering question is of Loeffler’s allegiance, now and in the future.

If you consider we just heard a very talented speaker, Jones, show unwavering support for everything the Republican party stands for, and he’s a Democrat, the lingering question becomes … does party affiliation matter at all?

More Jones: “I’ve taken a lot of crap from the Democratic party. I’ve got more arrows in my back then I can count! But I’m not going to back down, from no-damn-body. And if I can stay in this and still fight, I know you can!”

“I love you America, and there ain’t nothin’ you can do about it!”