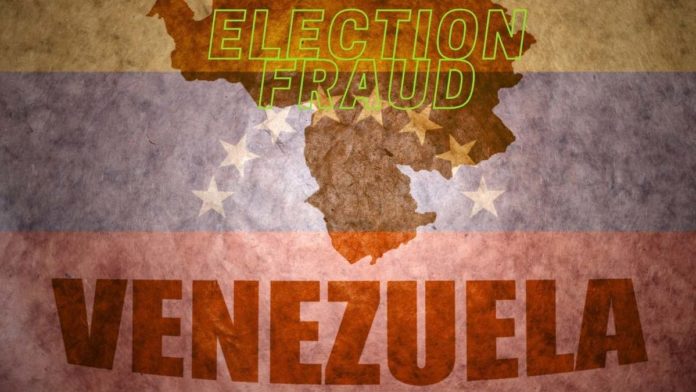 Just a Sunday in Venezuela –
Many Lessons for the US

CARACAS, Venezuela — Venezuelan President Nicolás Maduro is claiming victory in congressional elections in that country, according to ABC News this morning. The report from the AP’s Scott Smith says the election was “boycotted by the most influential opposition politicians and widely criticized internationally as being fraudulent.”

The story broke at about 2:30 AM Eastern Time in the US. With big parallels to what’s causing tension after a possibly-rigged US election, the story from Venezuela didn’t look to be getting much attention when I cross-searched for more information. Connections, literal Internet connections, to Venezuela, have been alleged during the recent US Presidential election, among many allegations live voting machines were connected to foreign countries.

Same machines, run by the same company! No matter which side you’re on in the US, election integrity is important, with important peripheral issues. If a country can’t have an election system people trust, the consequences are not arbitrary or unimportant. This should be a huge red flag waving in everyone’s faces; it’s good to see some news coverage.

Smith writes “By taking over the National Assembly, some experts say Maduro’s United Socialist Party of Venezuela will effectively smother the last remnants of democracy in the country.”

But that may not be the saddest part of the tale, nor the one that will sting US citizens the fastest. What we need to be concerned with is apathy. Apathy that breeds apathy. If we don’t care now, we might not care in the future, when we completely lose our ability to control government. It’s right in front of our eyes, right now, just this weekend, Sunday in Venezuela, the supreme commander of the country ran a make-believe election. It was no more valid or worth anyone’s time than a little game of smash ’em up played by 12 year-olds. Smith says “The win gives Maduro control of the last major branch of government outside his grasp.” So it clearly was a real thing.

An actual government, in broad daylight, spending time and money to lie as loud as possible, in a scam show that was attended by only 30 percent of the citizens. Everyone has already given up even trying.

Thanks to Scott Smith for bringing this report around so quickly today. Also, Associated Press writers Fabiola Sánchez and Jorge Rueda contributed to the report. Please share! Here’s the story.