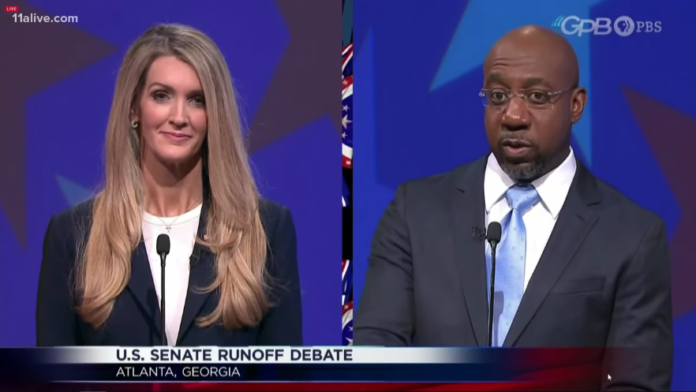 Senate candidates Kelly Loeffler and Raphael Warnock of Georgia square off in a heated debate on Sunday night hosted by the Atlanta Press Club. The debates come after the November elections as none of the candidates in either of the Georgia Senate races achieved the required majority of votes. Earlier in the evening Jon Ossoff debated was slated to debate incumbent candidate David Perdue. Our analysis of that debate is here. The Loeffler vs. Warnock debate can be viewed in its entirety below.

Among the questions posed to the contestants by the panel of journalists were two the remain unanswered.

When asked if he would add justices to the supreme court, Reverend Warnock completely ignored the question and asserted that Senator Loeffler voted to defund the police. To be clear, this is a question that many democrats including Joe Biden have refused to answer. Much like the former Vice President, it seems that Reverend Warnock believes the people he wants to represent can find out his position after he’s elected.

While Reverend Warnock refused to answer the question of whether or not he would support packing the US Supreme Court, he answered an unspoken question that should be on everyone’s mind. Would Warnock be another rank and file leftist taking his marching orders from the fringes of the Democratic Party? The answer to that question is a resounding “YES”. Raphael Warnock would defund the police, open our borders, promote socialist policies, and anything else the progressive left tells him to support.

Interestingly, he did express his actual opinion on an issue that will further undermine his own campaign. Regarding abortion, he stated that in the confines of the operating room there isn’t enough space for the government to be part of the decision-making process. In other words, he likely does not believe that the government has the authority to grant abortion rights, a position that even most of his would-be voters likely oppose.