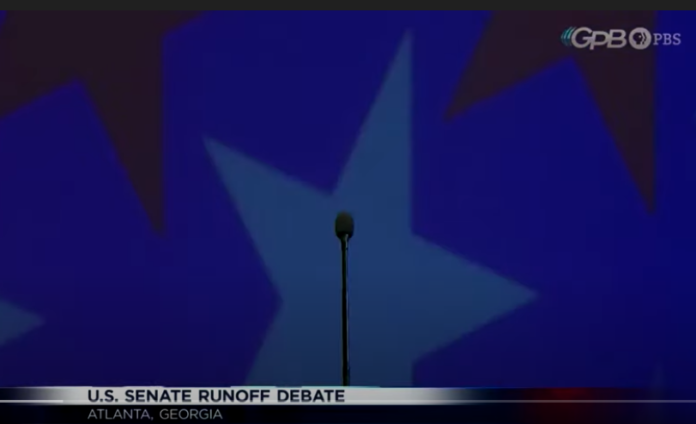 Georgia Senate candidate Jon Ossoff debates an empty podium leading up to the special runoff election scheduled to take place on January 5th, 2021. The runoff elections will decide which party holds the Senate majority in Washington for the next two years. Incumbent Senator David Perdue (R) opted out of the debate. See the video linked below for coverage (begins at 10:00).

Without an official challenger, Mr. Ossoff took questions from a panel led by Russ Spencer of Atlanta Fox5. Unlike other senate and Presidential debates that took place during the 2020 election season, the moderators remained decidedly out of the debate.

Mr. Ossoff made clear that he would represent the people of Georgia by voting for progressive values at every opportunity. Without a challenger in the debate, I believe this partisanship was a tactical error on the part of Mr. Ossoff. At one point he even gave his constituency the disclaimer that he may not always vote how they want. This was Ossoff’s chance to appear at least somewhat bipartisan in the purple state of Georgia.

Ossoff frequently reminded viewers of Senator Perdue’s arrogance. Senator Perdue likely calculated that Mr. Ossoff would show the people of Georgia what he really is – a dedicated progressive. He clearly believes that he can win the Senate seat by advancing the progressive values held by less than half the people he would represent. The bulk of arrogance should be attributed to Mr. Ossoff. Despite respecting him for his honesty, progressives should be disappointed in Mr. Ossoff’s performance. While Georgia clearly isn’t the conservative stronghold it used to be, it’s not Oregon either. Outwardly progressive partisanship should not be practiced by those who hope to win in purple states.

Senator Perdue calculated correctly, the people of Georgia already know who he is. They didn’t know much about who Jon Ossoff is. They found out that Ossoff is a man who spontaneously apologizes for his white skin tone and promises to promote “clean energy initiatives” like the Green New Deal. The people of Georgia found out that he associates the fossil fuel industry with widespread corruption and that it should be abolished. They found out this evening that Ossoff is prepared to be one of the hard-left progressives that only win elections in places like New York’s 14th district or Minnesota’s 5th District, and not in Georgia.