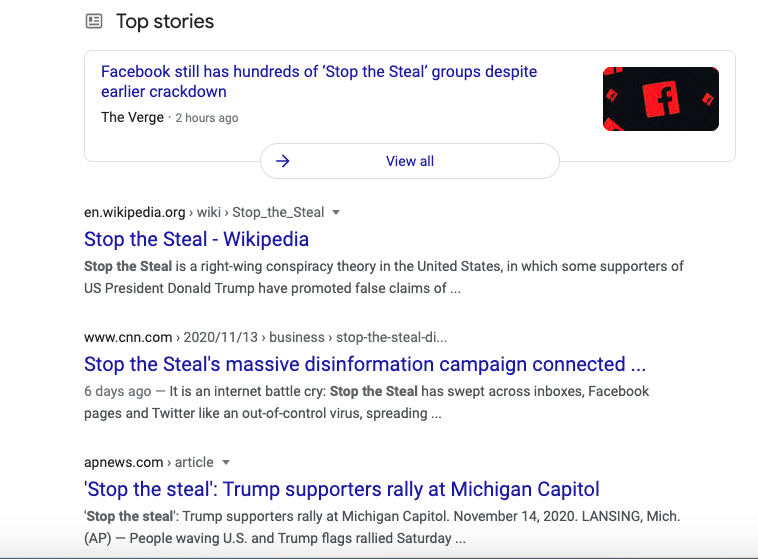 I was looking up https://www.stopthesteal.us/ on google this afternoon and was shocked at what I found. For those that haven’t visited the site, I encourage you to check it out. You’ll find upcoming rallies contesting the alleged Presidential election fraud. Rallies are most likely within driving distance no matter where you are (in the US).

For clarity, the results of the US Presidential elections have not been finalized as of today. Several mainstream news outlets, virtually all Democrats, and some registered Republicans are so certain that Joe Biden won the election that they are calling for President Trump to concede. President Trump’s legal team has been contacted by countless voters, poll watchers, and canvassers claiming they have evidence of voter fraud. In an attempt to convince boards of elections to do their jobs, the founders of StopTheSteal.us have organized rallies around the country to voice their concerns. In the video below, CNN reporters claim the allegations of voter fraud are false and elude to Roger Stone pocketing money raised by the charity organization.

Network news channels and other leftist organizations have been attempting to discredit StopTheSteal.us. Big tech companies have been “cracking down” on Stop The Steal groups on social media for attempting to spread “misinformation”. Interestingly, none of these same characters seemed to care anything about disrupting the organization of the riots and violent protests. They swept the burning and looting of hundreds of businesses across the nation under the rug.

President Trump’s legal team, led by Rudy Giuliani and Sydney Powell claims to have evidence of widespread election tampering. At this point in time, evidence of such tampering has not been shared with the public. Without having seen the evidence, there can be no determination of it’s worth. When the evidence is presented it is the responsibility of the US Justice system to decide if the information is credible.

Big tech organizations have preemptively discredited the evidence. They have apparently determined that claims of voter fraud are unfit for consumption. Recall that these same companies chose not to dispel what turned out to be false information in the Breonna Taylor case. They endlessly reported on false claims of Russian election interference and continue to facilitate meetings of holocaust deniers and flat earth societies. They continue to propagate false information from any and all purveyors other than the political right. To say big tech organizations are partisan is an understatement. Social media and the news networks that claim to be non-partisan should be conduits of information and facts. In America today they are anything but that, and people have grown weary. The absence of true information and the overwhelming abundance of false information is tiring.

We live in a free country and have the right to free speech. If we want to continue to live in a free country we are going to need people like Donald Trump who are bold enough to stand up to the abuse. Discrediting StopTheSteal is the latest battle in a war of information. Big tech and network news outlets spread misinformation and constantly discredit conservatives. They are hoping you will grow tired of fighting and give up. I will never concede.