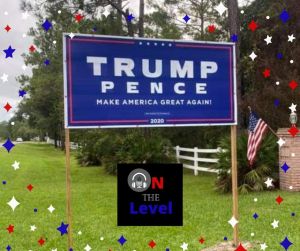 What if a presidential election could be foretold by the number of MAGA hats, KAGA mugs, or TRUMP2020 bumper stickers circulating?

Better yet, what if  it could be predicted by political yard signs seen on newly groomed lawns across America?

One could logically and statistically argue that this unofficial form of polling could be more accurate than what we received in 2016 and likely to continue to be fed in 2020.

Forgive me for a moment.  I am going to ask you to climb aboard the political time machine.

Just pretend you are a passenger in a 1982 DeLorean with Dr. Emmett Brown as your chauffeur. It might make it more enjoyable.

As you meander back to 2016, take a gander along the roadside.  Peer at lawns along the highways and byways.  How many Clinton/Kaine political yard signs do you see versus that of Trump/Pence? Chances are there is a drastic difference with the former outnumbering the latter. Certainly this would vary by regions. In the traditional deep blue sectors of the country where you would expect to see a plethora of ‘I’m With Hillary’ shrines you are more likely to see a Sasquatch than a visual endorsement for her.

Even in typical Democratic areas there was not a grass roots effort soaked in enthusiasm with voters vigorously staking down Clinton/Kaine signs on their lawns. If you happen to be in Pennsylvania, Michigan, or Wisconsin it was even worse.  Clinton didn’t make a single stop in Wisconsin. She put very few resources in Michigan and Pennsylvania.

She lost all three.

That ticket also had trouble getting people to rallies.  Have Doc Brown zip you to a couple of the Democratic presidential campaign rallies.

Remember you are in the time machine, there is no COVID-19 in 2016. Although it may appear you are in modern day 2020 after observing any Tim Kaine events.

Just take a look at the size of those crowds!

Not to brag here.  Okay maybe a little, but I have had more people at my kids birthday parties.  It wasn’t an exuberant campaign to say the least.

Okay that’s enough punishment. The flux capacitor is firing well, Mr. Fusion is full, and the wild eyed scientist can bring you back to present day.

The 2016 national pollsters had Hillary Clinton’s chances of winning anywhere between 70% and 99%. The final round of polling had Clinton over Donald Trump anywhere between 1 to 7 percentage points.  This included exit polling.

They were wrong. Utterly and devastatingly wrong!  Donald Trump won in an electoral college landslide.

The political left have spent the last four years blaming this defeat on Russia instead of pointing at the Washington lifer who ran a terrible campaign and neglected specific swing states that they thought were in the bag.

By the way, even after a House impeachment there still has not been any solid or credible evidence of ‘Russian Collusion.’  Which is why President Trump was acquitted by the Senate.

As of the publishing of this article, we are now 50 days prior to election day (November 3, 2020). The same national polls are once again showing a favor towards the Democratic candidate, Joe Biden.

Let’s be honest.  In 2020, polls are about as useful as a landline telephone.  Equally as useful is the 10 pound 12 inch thick telephone books we seem to still get annually in our mailboxes.

I’ll start with the biggie. Polls cannot represent people who refuse to participate in them.  Americans are becoming more afraid to express political views because of political civil unrest. They are not about to tell anyone, especially a stranger, that they are voting for the ‘Orange Man.’  That was a factor in 2016 and I believe is an even larger metric this go round. Tell someone you are voting for ‘Orange Satan’ and they might burn your house down. Another factor is that people lie. They may offer up an answer towards a political candidate and party, however it’s going to be a cold day in Hades when they actually pull the trigger for that political hopeful. It is a purposeful attempt at skewing the polls.  It’s real and it happens.  I can attest.  I’ve done it twice.  The total number of times I have been polled since 2016. This leads me to my next point.  How many times have you been polled in the last 2 election cycles?  I am going to climb out on a limb and guess that it is very few if any at all.   Low polling pools is a significant hindrance in obtaining accurate data for predicting election outcomes.  Without a large and diverse enough sample the pollsters are simply doing nothing but fishing in a barrel. Online opt-in polls are also a disastrous measurement for attempting to gain accurate representation.  Many respond for paid research. They respond solely on how they believe the pollster wants them to answer. A large number will take these polls and not even live in the country the poll concerns.  Another portion who take these opt-in polls aren’t even registered to vote. This is reminiscent of the totality of the NBA players encouraging people to ‘Vote’ (Democrat only of course) when only 20% of them are registered themselves.   Yes King James, whatever you say King James?  Can I fetch you some tea King James?  Pathetic! Many pollsters are biased. I know I know, it’s a shocker but it’s also true.  They ask leading and open ended questions attempting to sway the voter one way, their way. As if the poll itself is a ballot.You know the classic “When did you stop beating your wife?” trick. In 2020 it is to lure them away from the gates of hell where ‘Orange Satan’ and his minions dwell just waiting for people to jump from the light into darkness and join his regime. Muwahahahaa! Finally there is a portion of the population that just don’t care about the electoral process.  They couldn’t tell you the difference between a governor and a senator. They think the House of Representatives is a literal house in Washington D.C. where politicians fraternize with one another. They have massive tail gate parties while doing keg stands in front of the young interns proving to them that they can ‘party with the rest of them.’ Did I mention that this group was the rookie class of 18 year old kids that can now legally pull the lever?

I don’t know about you but I have yet to see any significant empiric evidence of Biden/Harris campaign signs.  Granted, I live in a conservative and traditionally ‘red’ area of the country. However, in this very same locality, there was no lack of Obama/Biden signs in both 2008 and 2012.

Similarly to the lack of Biden/Harris campaign signs that I see today, there was a significant drought in 2012 of Romney/Ryan signs. This was the Republican ticket of that cycle.

We all know how that election turned out.  Maybe Mitt Romney would have done better running as his Twitter counterpart Pierre Delecto with Pepe Le Pew has his running mate?  But hindsight’s 20/20!

So it isn’t necessarily a Red and Blue issue.  It is a matter of enthusiasm and belief in the particular candidate.

Could it also be that those traditionally voting blue just aren’t that excited about a 77 year old lifer in Washington that has more than lost a step….or word?

A man who has been cooped up in a basement for months?  His handlers fear that he may actually have to answer an honest question by a real journalist.  Instead they have staged video chats with barely literate and more than vulgar recording artists like Cardi B.

Empirical evidence shows many of the Democratic base are not all that enthusiastic about ordering the newest “Build Back Better” campaign sign to put on display for the world to see.

In stark contrast I can’t seem to pass by more than a handful of homesteads before a Trump/Pence campaign sign comes into view.  Even more common are large porch flags flying commonly next to an Old Glory waving in synchronous fashion.

I understand that those that live in condominiums, apartment complexes, etc. will not have the capability of displaying the love for their favorite candidate if they so desired.  That’s where the hats, coffee mugs, shirts, bumper stickers, etc. all enter the equation.

I would also concede that those that own Donald Trump or Joe Biden toilet paper rolls would be a display of despair for that particular candidate.  But who’s inspecting the personal lavatories of Americans unless you happen to be Mike Rowe?

I have chatted with many friends who travel extensively throughout the state of Florida (my home state).  They also corroborate what it is I am proposing. Even in the commonly Blue districts of the state.  They are also seeing more Trump/Pence campaign signs than Biden/Harris.

Keep in mind these are just the cases where people aren’t afraid to display their allegiance to the POTUS.

In a sense I believe we can have a better prediction of a presidential election outcome based on what we see (signs, shirts, mugs, etc.) as opposed to what we hear (polls and political pundits).

A large component during the 2016 election cycle was undoubtedly the ‘Trump Factor.’ It created an enthusiasm like no other.  If that passion has dwindled, it can’t be by much. Everywhere President Trump goes the crowds are still quite large. Even in a COVID-19 stricken world. We can’t really compare a Trump crowd to a Biden crowd at this point. Biden is still holding up in his basement only to come out for some warm milk and ice cream.  Specific elements involved in the Trump fervor included the fact that he wasn’t a ‘lifer’ in Washington D.C.He’s rude, crude, and comes off as brash. Very few deny that about the current POTUS. But people believed he would be the perfect man to run the country regardless of what the polls were saying.  So in 2016, in the quiet confines and serenity of the polling booth,  many Americans filled in the bubble next to Donald J. Trump (R).To this day and under no circumstances do they not want others to know. Why? Because on November 3, 2020 they are going to do it again.

Shawn is the founder of ‘On The Level’. He is a practicing Physician Assistant. He is married to Jade and they have 5 children. He also host a weekly radio program on Grace Life Radio called ‘Word For America’.