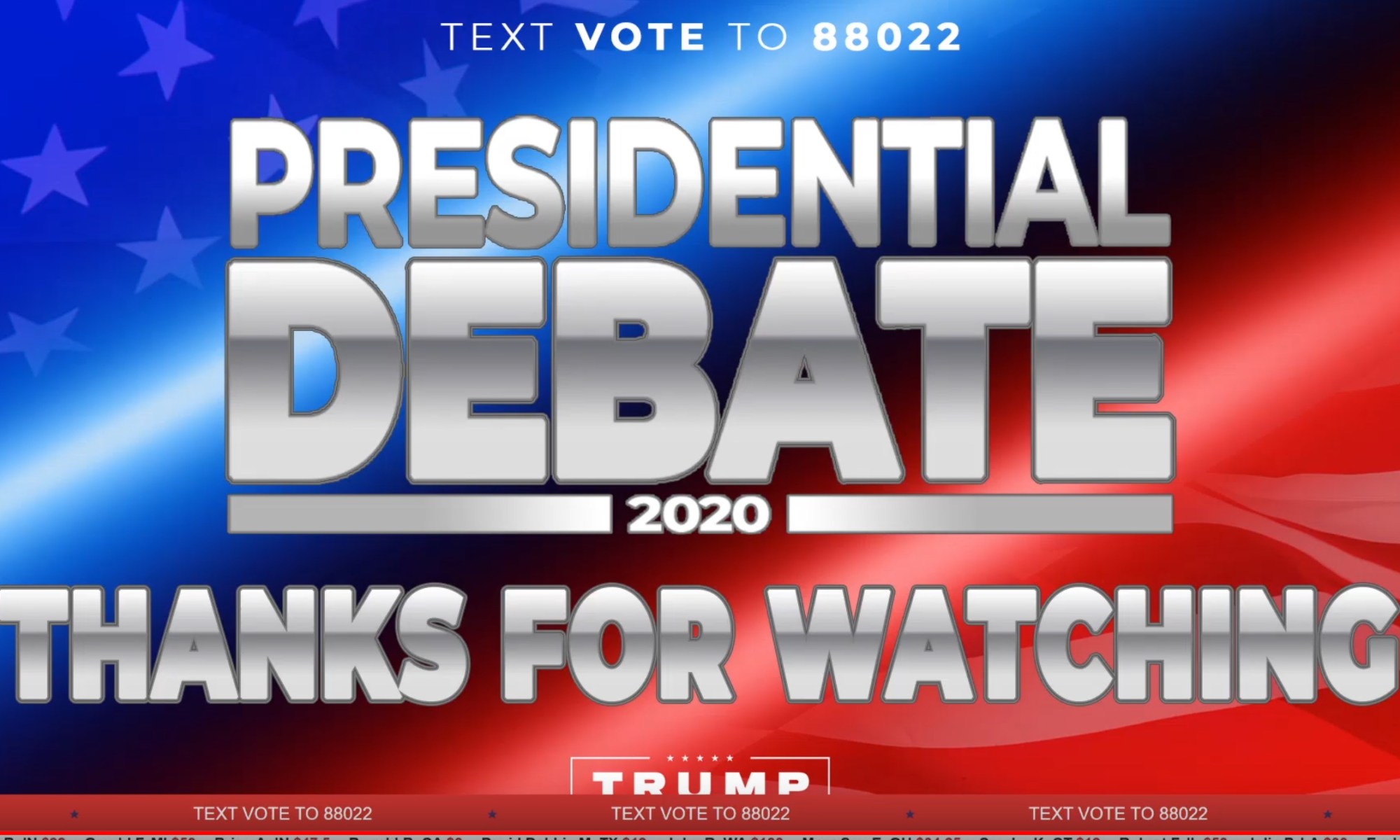 “You’re the worst president America’s ever had, c’mon!” announced US Presidential candidate Joe Biden, in last night’s much-anticipated debate. At the same time, comments on YouTube’s live feed, flashing by nearly too fast to read, were heavily pro-Trump.

It’s hard to view a debate that’s so lopsided. The energy around the two candidates is like night and day, with Trump proudly using Air Force One as a backdrop for enormous rallies, and Biden mostly staying home and not having any events. One man, of course, on one side, is the seated President, lending him credibility. On the other side, Biden called the President, right in the middle of the debate, a clown. Biden, and his running mate Kamala Harris, are both intent on sounding “cool,” accounting for Biden’s most famous line in this especially-important race, being watched by the entire world: “C’mon man,” a line he used numerous times during this 90-minute debate.

Both men wore striped ties, blue with red for Trump and black/white for Biden. They both appeared confident and prepared. The President remained polite, ignoring the “clown” comments. Moderator Chris Wallace for Fox News came in with some good, pertinent topics.

Wallace was firm noting that Biden “never called for the leaders in Portland and (other cities) to call in the national guard,” on the topic of riots across the country. This discussion was a good example of Biden’s unwavering devotion to his own way of viewing current events, almost as if he decided in the past how he’ll feel about things in the future; it often feels canned or predetermined. For example, Wallace asked the candidates if crime is a “party issue,” when Trump explained the violence is only happening in Democrat-run cities. Trump said yes, he thinks it’s a party issue, while Biden averted, avoided. Some viewers, after the debate, described it as “disappointing.” I think the reason is, we already know what Biden’s “supposed” to say. It’s easy to see.

Not answering about the “party issue,” Biden instead veered into this: “he wouldn’t know a suburb unless he took a wrong turn,” which point Biden twisted in as if it were important, interrupting the President. There was a good deal of interrupting, but frankly, without the triangle created by Wallace sometimes joining in, this debate would have been a real dog.

Biden got the floor with the interruption, then mentioned something cavalier, sensible, earthy and everyman, about “soccer practice.” I’m not going to rewind the video for this detail; it was a “walk in the park” moment during an important discussion on violence. Getting the floor, he then immediately changed the subject, somehow, to COVID. To me, a halfway intelligent viewer wanting to hear points of view, it was a nightmare. This story of the Democrat party is well developed, but we’ve figured out it’s all you ever, ever say.

As my duty as a reporter, I took the following note, hoping it would make sense in the context of my retelling of the story. I wrote “What’s happening in Joe Biden’s head is a nightmare, and he truly believes it. The biggest monster under his bead is COVID. He really believes it. He’s completely and totally committed.”

Remember, I mentioned these two men are very different? One of the problems (which I think is unconsciously driving opinions) is Joe is famous for lying. The “truth” is, we can’t believe a thing he says. If you combine that with Joe being completely committed to a predetermined path he must always push along, a party plan, Trump entered this debate on the same wild, white stallion he always appears to ride, while Biden arrives at every event on the back of lost credibility. His horse cheats, and he appears to refuse to abandon it.

Now, you may agree with what I just said, or you may not. Look at this:

Trump: “Someone’s got to do something about Antifa!”
Biden: “Antifa is an idea, not an organization!”

That’s crazy. Okay, now we’re on the same page. I’m not trying to sway anyone. But look, he said something really curious, the dumbfounded one. He said Antifa is an idea – he’s trying to downplay and avert, knowing well by doing so he’s complicit in the crime that’s happening, at the hands of a group that exists, has lots of members, has been videoed with U-Hauls filled with body armor, shields and weapons, and calls itself “Antifa.”

When you really commit to a party plan … you can’t have a good on-the-fly conversation. If you feel the sensibleness broke down when Biden said “Antifa is an idea, not an organization,” I agree, and so do millions of Americans. I know, from talking with Americans, we’re confused, yes, but while we’re not stupid, we’re being expected to be. It’s invisible to Joe Biden that Americans do not accept an answer like this, while they know what’s really happening. He failed to address the issue, but worse, he failed to acknowledge it even exists. Trump maintained a polite posture during the debate, though constantly plucking at Biden, seemingly on purpose to (easily) prod out nonsense.

It doesn’t make it better, for Americans, when the contender is both lying and insulting.

Most of it’s not a flat out lie, but nonsense has no place in this conversation; it’s a huge loss of credibility. If you want a flat out lie, that happened next. Biden started out, regarding the military and Trump “The way you talk about them being losers, being suckers,” but backed off the offensive. It may have been the only on-the-fly thinking Biden did, not being able to forget himself recently calling a group of soldiers “stupid bastards.” There was never any evidence of the wild claim of Trump saying anything derogatory about soldiers, and a Polish soldier who he allegedly insulted has stood up on Twitter denying it happened. It was a completely made-up story, a worn-out lie Biden tried to resurrect, but then stopped when he stepped in his own mess. That’s where his party plan has led him, and it will continue to happen. It’s important that Americans pay attention. You’ll see all of this.

After the debate, someone could accuse Joe Biden of lacking in facts, or worse, perpetuating lies. The clever plan, now understood by millions, is to accuse the other side of lying. During the debate, when Trump explains his concerns about COVID, his opponent completely fails to say anything about why he disagrees, instead launching into an inappropriate and misplaced song and dance about “all the lies, blah blah” (rough quote), portraying Trump as a liar. It’s a song we know the words to too well.

Halfway through the debate, Chris Wallace was not able to contain a laugh when Trump said “nobody would show up” if Biden tried to hold larger events. It was an evident laugh.

Many people feel they can trust Donald Trump. They have boat parades so big they have to be careful the crowded boats don’t sink each other; they rally in cars and trucks in miles-long caravans and are visible in the tens-of-thousands at Trump rallies, over and over again, as this tireless man shows how hard he can work, when the work needs to be done. Many people, and for good reason, I think, have called him the best President in history.

“You’re the worst president America’s ever had, c’mon!”

If the evening’s debate didn’t convince anybody to change their minds, it should at least level the playing field regarding who the players are. Biden has been invisible, and both he and VP-hopeful Harris have fumbled words in public about their ticket, Harris recently referring to the campaign as the Harris campaign (then quickly correcting herself). He uses her more than he talks himself. While Trump is bringing in bigger crowds than Pink Floyd.

Maybe (and it’s understandable) you didn’t know who the two candidates were. Maybe you never got a good look at them both. I hope you can weigh them on credibility, and I hope you realize someone is taking you for a fool. The ultimate question is simply …

Who do YOU believe?